Our plans for the next five years of the cinema are under discussion throughout the spring, and we’ll continue to share them here on the blog.

The Swedish government has set some goals of their own for the year 2020, chief among them the reduction of carbon emissions by 40%, while 50% of our energy use should come from renewable sources, 10% of our energy for transportation should come from renewable sources, and energy use in general should be 20% more efficient. Progress can be followed here >

When we set the goals for the cinema, of course we want to be better than the government. So we’re aiming for a steeper reduction of our carbon emissions. It will result in our giving up touring with the van. If anyone would still be interested in hosting us by 2020, we’d have to use another mode of transportation, or another format for the screenings – and we’ll have more info on this shortly! We’re of course also aiming for an expansion of the solar panel setup at our main facility in the village, even though most of the energy used by the cinema during a summer season already comes from them. But the installation of more panels could compensate for energy used outside-of-but-for the cinema in the production by others of goods and services that we need. Finally, in this segment, we’re also discussing how the format of a library can be used in the village. What could usefully be lent and borrowed at the library besides books, for efficiency and savings? Maybe electricity?

From the cover of An Atlas Of Agendas by Bureau D’Etudes: HELIOSPEHRE – COMMUNISM OF WARMTH – sharing warmth – sharing light

In the interest of financial transparency: the budget we received from Moderna for arranging the screening at Tempo Documentary Film Festival was set to 10 000 Swedish Crowns (around 1070 Euros, at the moment). We decided to split the sum into five parts, where the participating artists would receive one part each. The fifth part, which would have been our fee for putting the program together, became a topic of discussion in the group. Since our activities at the main site in Höja are financed for many years to come, maybe we could re-direct the relatively small sum of money from our fee into assisting some fellow travellers, some other cinema somewhere?
.
We’ve written before about the Rojava Film Commune >
.
.

.
.
Rojava is an autonomous region in the north of Syria (close to the border of Turkey), practicing stateless democracy based on self-governance, gender equality, the right to self-defense, and a communal economy.
.
The EU and the Swedish state recently promised financial support to Turkey, funds to be used for keeping Syrian refugees in Turkey and preventing them from continuing on into Europe. 3 billion Euros from the EU, 77 million Euros from Sweden. What if these funds were to be given to the re-building of Rojava instead? That’s a big ‘just imagine’.
.
We got in touch with the Rojava Film Commune and begun discussions on possible forms of co-operation with them. The first step is arranging a transfer of our fee from Moderna – 200 Euros – to the Film Commune. We know this sum is next to nothing for them. But Moderna is a state-funded museum, and so as part of our ‘just imagine’, we choose to see the fee as originating from somewhere within the Swedish state budget.
.
Rojava Film Commune >
.
Rojavakomittéerna >
.
. 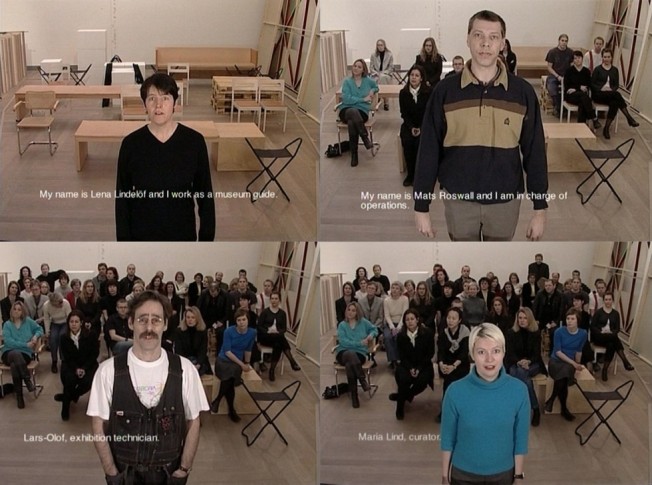 Annika Eriksson, Staff at Moderna Museet, 2000. The staff at the museum introduced themselves and gathered in front of a stationary camera. © Annika Eriksson

“Staff at Moderna Museet begins with a shot of one of the exhibition spaces of the Museum. One after another members of the staff enters the room and state their name and position, and find somewhere to sit. The room is slowly filled up. At the end of the film the staff are gathered in a group portrait, which gives a documentary feeling as well as a historical picture of a workplace in constant change. As a visitor in a museum you only see the art and not the person working with it. Annika Eriksson plays with the rules of the museum when she exhibits its staff, thus making them the art. Her films clearly show the individual behind the impersonal and the tradition-bound history that museums usually have.”

“Interview with Saskia Holmkvist, 2005, is an interview with the artist in which she talks about the film we are just about to see. She explains that it is about issues to do with credibility and authenticity. But she is interrupted by the interviewer who, instead of asking the next question, comments on her body language and her manner of expression. The whole thing turns into a tortuous process in which the Saskia Holmkvist in the film tries to comply with the admonitions of the “coach”. This work is commenting on an art scene which is under such intense pressure and where success is increasingly dependent on a professional presentation of one’s own artistic achievements. At the same time it is mirroring a trend in society as a whole, in which the ego is becoming more and more of a trademark and apparently spontaneous comments and documentary images are the product of meticulous repetition and reconstruction.”

The screening at Tempo documentary film festival takes place on March 10:th at 20.00. The site of the screening will be under the northern end of the Liljeholmen Bridge, near Tanto in Stockholm – the same site where we screened Koyaanisqaatsi in 2014. Catrin Lundqvist from Moderna will be on site to handle introductions. Hot beverages will be served.

Gillian Wearing, Bully, 2010
© the artist, courtesy Fly Film and Maureen Paley, London
.
This work was born out of Gillian Wearing’s first feature film Self Made (2010). Under the supervision of Sam Rumbelow – an acting teacher specialised in method acting – nine amateur actors work on an improvisation exercise about bullying among youths. In a cathartic act, James, a former victim, directs the scenic tableau based on his own memory of an actual situation that happened to him. He gets more and more carried away by the emotions of the situation. When, towards the end, he accuses the actors of being responsible for his still persisting panic attacks in real life, it becomes clear that the separation between reality and fiction is blurred and the person acting and the role acted out can no longer be clearly separated.
.

Our cinema has been asked by Moderna, the Museum of Modern Art in Stockholm, to consult on the program for a screening at the documentary film festival Tempo. Originally, the theme of this year’s Tempo festival was to be ‘class’, and that is how come our socialist cinema was considered for consulting by Moderna. The theme was then changed to the slightly more inclusive ‘power’.

Basim Magdy, 13 Essential Rules for Understanding the World, 2011
.
In the first of the four films we’re showing at Tempo, 13 Essential Rules for Understanding the World by Basim Magdy, a list of numbered guidelines seem to be narrated by tulips with faces drawn on their petals. The bleak, futile and mostly defeatist scenario, outlined by the rules, is interrupted by scenes depicting acts of transition and repetition. Along with the subtle and dark humor, such interruptions are key to the narrative, and act in synchrony with his other films.
.
More about the work of Basim Magdy >
.