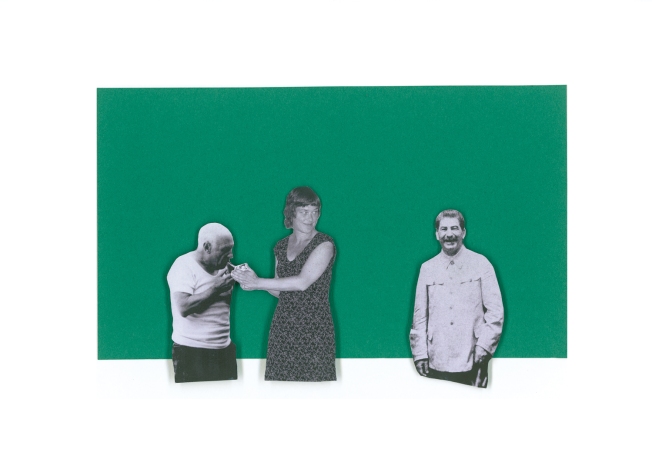 On December 1 2012 we’ll do a brief presentation of the Sunshine Socialist Cinema and screen the film Stalin by Picasso or Portrait of Woman with Moustache by Lene Berg during the Socialist Forum 2012 in Stockholm. The screening takes place at 15.45 in the ABF house at Sveavägen 41.

In 1953 Joseph Stalin died. Pablo Picasso was asked to draw a portrait of Stalin for a commemorative issue of the French Communist weekly Les Lettres françaises, which was edited by Louis Aragon, a friend of Picasso. The drawing provoked strong reactions from the French Communist Party, and the party’s Central Committee published a condemnation of both Picasso and Aragon on the front-page of the daily L’Humanité. The major criticism of the portrait was that the style in which it was drawn did not do justice to “the moral, spiritual, and intellectual personality of Stalin”.

“Stalin by Picasso or Portrait of Woman with Moustache consists of a video, a book and three façade-banners. The project deals with the so-called ‘Portrait Scandal’, or `L’affaire du Portrait`, which later has been named the first consequence of Joseph Stalin’s death in 1953. It centers around two great, short men and a drawing that created strong reactions. On one level, it is about how two icons from the 20th Century, Stalin and Picasso, once were perceived and how much their public personas have changed since then. On another level, it is about art and artistic freedom, or un-freedom, and of ways of reading and using images, particularly images of so-called great men. But perhaps the most interesting aspect of this anecdote from the beginning of the Cold War, is how one simple charcoal drawing can initiate so many feelings, discussions and intrigues as this one did – both in 1953, and in 2008.

The reactions towards Picasso’s drawing in 1953 expressed a need to control what was
presented in public, and strong demands for obedience towards common beliefs in something
particular, in this case Joseph Stalin. Seemingly these are thoughts from a distant past. But the project proved to be less nostalgic than expected when the party-secretary of the governing Norwegian Labor-party unexpectedly withdrew the permission to use the façade of the People’s Theatre Building in Oslo for the public part of the project, a permission that had been granted by the board of the building some months before.This attitude was later more or less repeated when I was invited to show the project at Cooper Union in New York in October 2008. After two days of a planned 6 weeks show, the three façadebanners were taken down from the façade without a warning and without discussing it neither with me nor with the curator before hand. In 1953 one of the problems with Picassos drawing was that it was considered bad propaganda for Stalin and thus for the communist cause. In 2008 one of the problems was that the façade-banners were not clear publicity, and that some people found it unacceptable that the project did not express a clear critique of Joseph Stalin.

Stalin by Picasso or Portrait of Woman with Moustache was first presented on the topfloor of
the People’s Theatre in Oslo March 2008 (without the façade-banners). Later that year it
was part of the show Headlines and Footnotes at Henie Onstad Artcenter in Oslo and the
Taipei-Biennial. It has later been shown among other places at the Bienale Cuvée in Linz
2009 and Contour, Mechelen 2009.”

The Sunshine Socialist Cinema will be sharing the stage with artist Nina Svensson and writer Margareta Ståhl, who’ll be presenting a graphics portfolio made by Albin Amelin and Ruben Blomqvist in 1933, Humanitet, with images protesting against the rise of fascism. We’ll look at similarities and differences in how a political work of art can be constituted and distributed.

Free entrance, open to all.

During the symposium CIRCULAR GROUNDS #1 the Sunshine Socialist Cinema will introduce a couple of clips from Kuxa Kanema newsreels, recorded in Mozambique in the mid 1970’s. Kuxa Kanema means “Birth of Cinema”. When Mozambique gained independence in 1975 after nearly 500 years of colonial rule, the Marxist FRELIMO party and the president Samora Machel founded the National Institute of Cinema in order to produce and distribute images of the country re-building itself into an independent nation. The 10 minute Kuxa Kanema newsreels were screened weekly in cinemas and through mobile screening units transported around the country in old VW buses.

The people working on these newsreels were all novices, educated by foreign filmmakers invited by FRELIMO from Yugoslavia, Cuba, Brazil and the Soviet Union. Jean-Luc Godard attempted to help set up a national television system, teaching people in rural villages to film using video cameras. The anthropologist Jean Rouch set up documentary filmmaking workshops which shot so-called Cartes Postales every morning on 8 mm and then screened them the same evening, in the first instance of what became known as Varan Workshops. Postcards on film, of the people, by the people, and presented to the people.

In Kuxa Kanema, film was meant to be an educational tool used to create an independent  Marxist state. Its’ example has inspired several contemporary artists to comment upon it. Kuxa Kanema speaks of jilted idealism and of conflicting desires, of a wish for art to get to play a part in the construction of a new society. 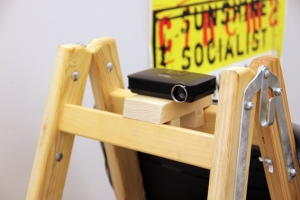 The Sunshine Socialist Cinema held a presentation at IASPIS in Stockholm during the Open Studios 21-22 September. We made a brief introduction to the cinema setup and programming, screened the video A Ruda Road Movie by Marie Bondeson, announced our Open Call, and all of it through our new mobile Minimal Cinema. For more info on the Open Call, check the menu above.

The solarpanel produces 13 W per hour and charges a car battery. From the car battery and a 220 V converter we can then charge the internal battery of our pico projector.

The pico projector has an internal battery and holds a memorycard, which makes it an easily transportable filmscreening apparatus. It’s only about 13 x 6 x 2 cm in size. When the environment is dark enough, we can get an ok size on the projection, though obviously not as good as with our ordinary projector. 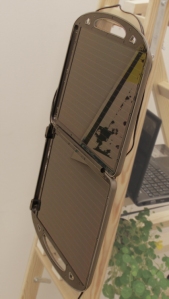 Another newspaper article on our cinema, this one written by Abigail Sykes for Skånes Fria Tidning – here’s the link 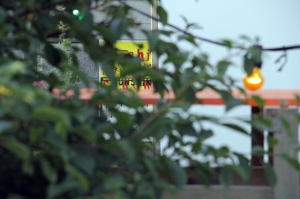 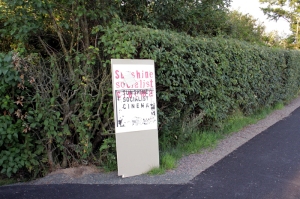 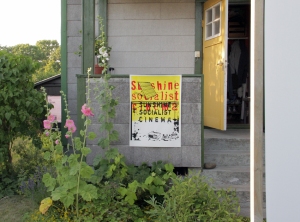 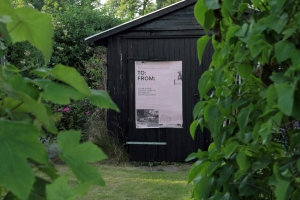 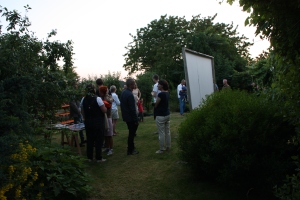 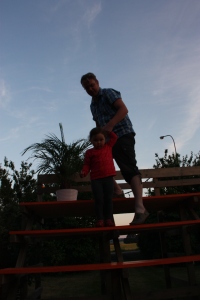 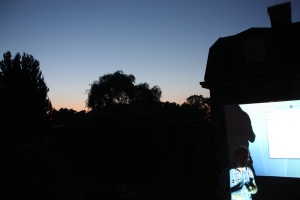 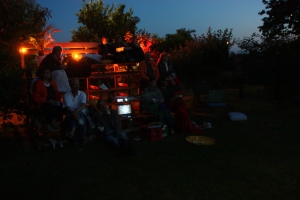 Break for hot tea between Farocki and Persson

All of the above photos taken by Peter Nilsson!

Kristina working on curtains for the cinema

Sunshine Socialist Cinema is an outdoor cinema powered by solarpanels, run by artists Kalle Brolin and Kristina Müntzing. We’re re-distributing surplus light from day to night by solarpanel and projector, and screen films that generate discussion on socialist topics. Some themes for the films and videos to be screened include redistribution of surplus and contemporary commons, post-industrial survival strategies, and artists committing to a collective.

The cinema is installed in a garden in the southern Swedish countryside, with screenings occurring regularly during the summer months. A 230 W solarpanel provides power for a 270 W projector, meaning two hours of sunlight gives us one and a half hour of projected film at night. Screen and bleachers purposebuilt, free entrance, artworks on display, and connections developed gradually with local organizations. Programming is discussed and technical issues worked out in a study group run within the local workers educational association, ABF, where we’re also figuring out a typology of political film and filmmaking. The Sunshine Socialist Cinema is inspired by public screenings attended in Parque Rivadavia in Buenos Aires in the noughties.

Workers Leaving the Factory by Harun Farocki starts from the first film ever shown in a cinema, and traces the recurring image of workers exiting a factory throughout filmhistory, setting the stage for the post-industrial condition. What is the image of the worker, when the worker has left the factory, and labor is performed in every aspect of life? Is the dissolution of the workforce outside the factory gates where films pick up on individual characters and follow them away from collective life?

In Politicamente Correcto!, Claudia Del Fierro dresses up like the workers at a textile factory in Santiago, Chile, and joins them whenever they exit the building for a cigarettebreak. An artist blending in visually with the workers, entering and exiting the gate unnoticed, she creates an ambiguous picture of both alienation and of the artists’ desire to place herself on the side of the workers.

We end with Space Debris by Lina Persson, a film showing the perspective of a camera detached by accident from an astronaut, who is in the process of trying to free a stuck solar array on the international space station. The camera drifts into space and continues transmitting film as it moves further and further out of range. 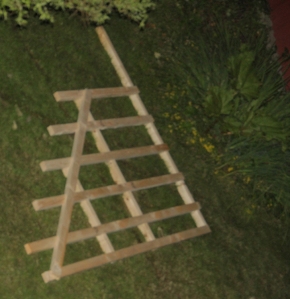 Bleachers being built! This is one out of five segments holding up a five-floor bleacher, with seating for about 25 persons.

Check out how other people go about setting up their backyard cinemas at backyardtheater.com/