Screening in Höja on Thursday 19 July, and it’s an Election Special! Come by and help us make sense of this thing? We can talk about pizzas and personal voting, about hope found in demographics, about morality in the face of material reality.

Among the films shown will be Team Jolie by Hannah Black. In the video Team Jolie we get to consider a number of statements which at first seem like arguments pro and con the two actresses Jennifer Aniston and Angelina Jolie – not just regarding which of the two is a better soul mate for Brad Pitt but also everything concerning what they mean and stand for as icons. Are you Team Aniston or are you Team Jolie? 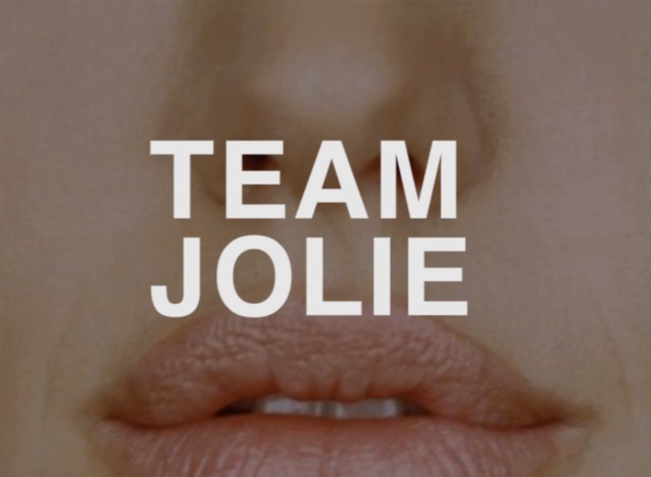 Rather than recounting a sexist media narrative, Team Jolie becomes both a poetic reflection and a theoretical analysis, point by point and line by line. Quoting from the script of the film:

I wanted to like her but I couldn’t. I could not stand her desire to be liked. I punished her minutely by withholding my affection as if this could do anything but affirm her power. Her achievement was the mirror of an indescribable failure. Even though when it became clear that although she was a machine for producing affection, she too had failed to be loved, I was not sure that I could forgive her the ease that she had previously been.

Because pain is for everyone, she represented the fierce enjoyment of pain with whatever necessary emptiness in present social conditions. Someone who once really made me suffer or who was the premise for suffering I somehow may have wanted sent me some lines from Marx where Marx seems to suggest that in communism we might experience pain and pleasure differently. I was pleased to see a solution to the problem of who in communism would work in the sewers—perhaps even the smell of shit will be experienced differently then. Perhaps, like animals, we will no longer be alienated from what Benjamin calls “the most lost forgotten land of our own bodies.”